Identifying Grizzly Bear Mothers in care of Cubs of the Year


The Elk Rut in Jasper

The Elk Rut is in full swing from mid-September to mid-October. During the elk rut, Male elk(Bulls), compete for the hearts of their female counterparts(cows) as cow elk enter their estrus cycles. Each cow comes into estrus at different times of the rut.

When Bears come out of hibernation in Jasper, the First to emerge are typically Large Males, followed by solitary females and females with yearlings or two-years olds. The last to emerge are female Bear Mothers with new-born cubs. 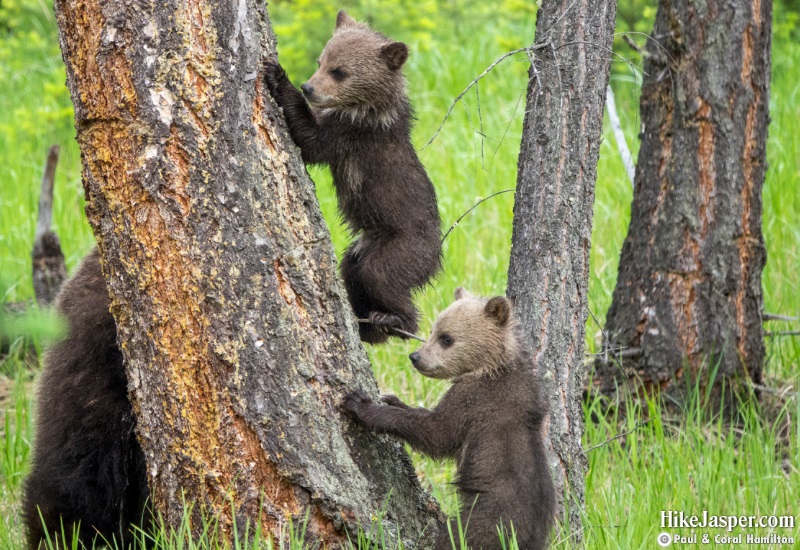 Jasper Grizzly Bear Family in August, 2019 near Jasper.
The Berry Season has been quite good this year, so expect to see more Bear families like this remain down in Jasper's Valley bottoms for a little longer.

Bears with cubs of the year have been encountered near common hiking areas in Jasper. A mother Grizzly Bear's shyness is usually obvious, however, Brown Bears do seem to require more room to avoid becoming anxious.


An encounter with a Black Bear mother and Cubs is common in Jasper. In most cases you will find that Black Bear mothers are fairly calm as cubs instincts to hit the tree tops relieve the mother Bear of stress. If however, you are in an open area with no trees for the Bear cubs to climb, you can expect the mother Bear to become more excited. A mother Black Bear will feel a lot more vulnerable if her cubs have to remain on the ground, and she may focus her attention on you - the threat.

Mother Black Bear with 3 Little Cubs of the Year 2018


If a Black Bear mother is concerned you may hear her vocalize to her cubs(it sounds similar to a Gorilla grunt or bark), telling them to get in the trees. In most cases we've seen, the mother Bear's agitation is present, and grows until the cubs are in a tree. Then she usually carried on foraging.


Male Bighorn Sheep are a little more aggressive between late October and January.
Male Sheep may not be shy about claims to their favorite wildlife refuges. If you keep moving, they will not focus on you, but stopping and staring is exactly what they do to each other before they carry out their well-known head to head face off and batter. 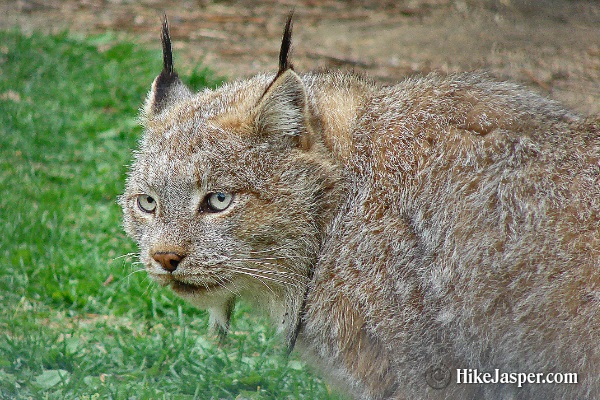 An angry Grizzly Bear is something you are probably never going to see, but be prepared and respectful as you never want to feel that you could have avoided an encounter that has gone bad. If you are unaware in Bear country, or your hiking becomes too ritualistic; you need to change something. A poorly planned, poorly timed or unlucky judgement call around bears may not always offer another chance.


An encounter with a Grizzly bear mother and cubs is less likely as Brown Bears usually seek out solitute.
A mother Brown Bear's shyness would be obvious in most circumstances, however, Grizzlies are more protective of their cubs. A mother Grizzly Bear, even hundreds of meters away, may charge at the sight of a threat to her cubs. Like Black Bears, Grizzlies will take every opportunity to avoid an encounter with us, but a Grizzly mother may also cover a tremendous amount of ground to remove any threats.

Grizzly Bear Mum with Tiny Cubs of the Year

In an actual Bear attack the Bear is often extremely quiet.
From the time of hearing any rush to actual contact may be just a few seconds >> CAN YOU ACCESS AND READY YOUR SPRAY THAT QUICKLY?

If you are hiking, start dealing with your bear encounter at first sight. Ask yourself "what could happen...worst case scenerio," and do your best to start making your situation immediately better instead of disadvantaged.

And remember.. Bears are not the only animals that possess the ability to harm a human while hiking in Jasper.

A Bear Cub of the Year Observing Mum Eating Berries 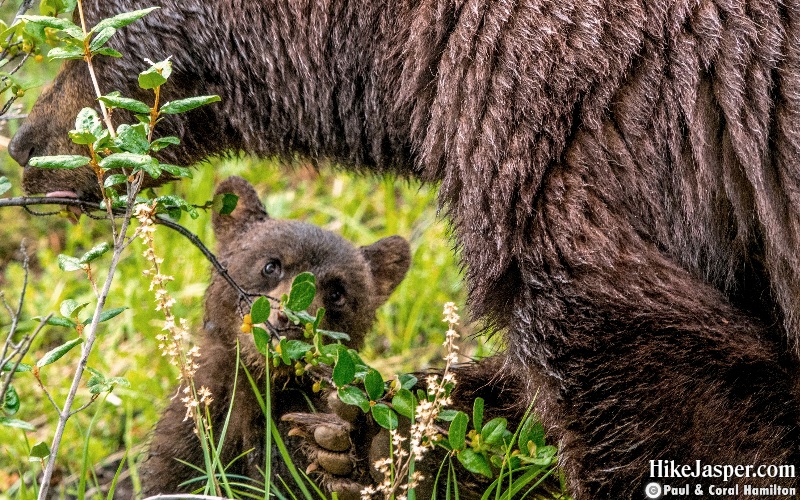 Claws on a Black Bear seem cat-like, but a Black Bear weighing the same as a big cat such as a lion, can climb circles around them among the trees. A Black Bear's compact body and exceptionally powerful chest and back make ease of tree climbing.

Bear Cubs Zipping Up and Down Trees

Bears noses are claimed to have an ability up to 75 times more effective than humans, which also helps justify their lack of interest in us. If Bears were indeed interested in humans as prey it would reveal itself very consistently.

While hiking in Jasper, the Bears you come across are often the ones oriented upwind or near a food source. Bears, when able to smell us(downwind), often seem to move away from humans. On the flip-side, if a Bear is fairly close to you upwind, there is a good chance that you will smell them. Their odour certainly can assist us with our poor sense of smell! 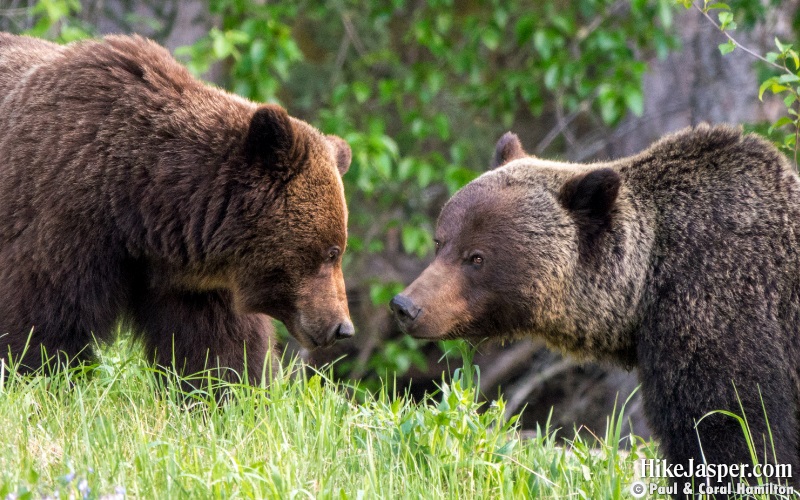 Bears have evolved unique bone characteristics that offer an ability to become somewhat elastic instead of brittle as they age. These "flexible" bones not only compliment a Bears' hibernation (lack of nutrients), but may also mean an older Bear has physical advantages in its' genetics that other animals do not. 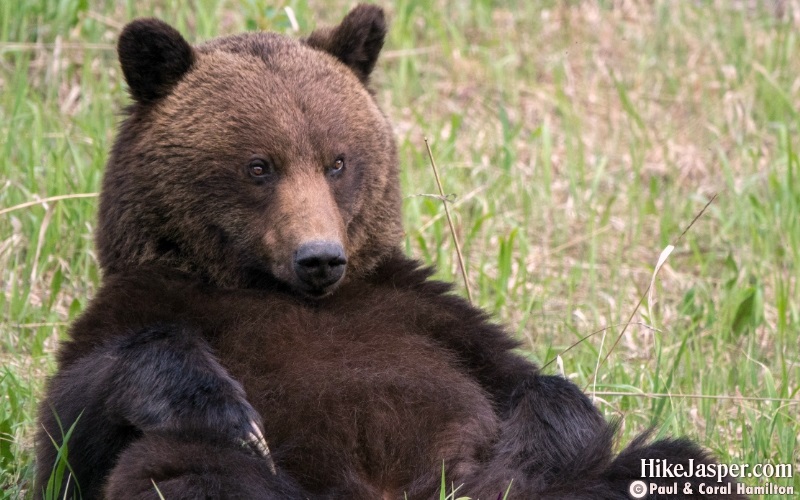 Make noise... talking may be best. Watch for fresh bear signs. Be cautious of areas with bushes that have many ripe berries as the bears are probably not far off. Travel in groups. Never approach a bear (stay back a minimum 100 metres - preferably 300 meters when hiking). Carry bear spray and know how it works. 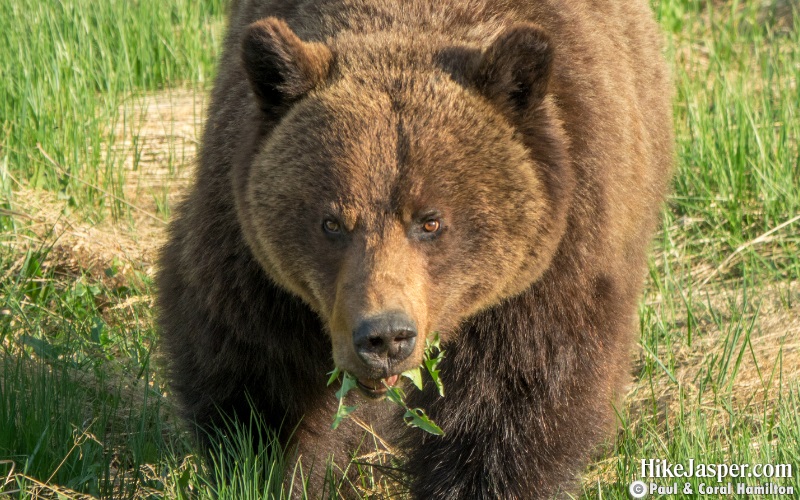 How to handle a BEAR ENCOUNTER
- Stay calm
- Get your bear spray ready
- Speak to the bear - let the bear hear your voice
- Back away slowly, NEVER run 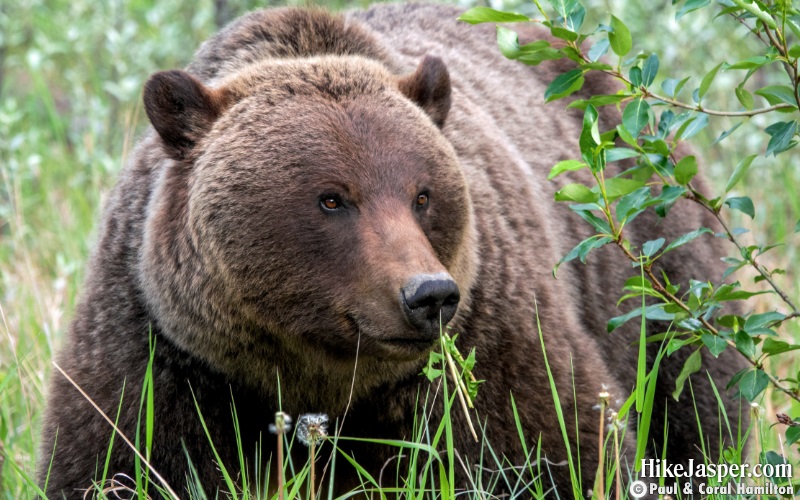 You wouldn't think we would have to say this about Bears in Jasper, but they are indeed Wild animals that live a chaotic life compared to ours. When photographing bears, use common sense. Don't follow a Bear into the forest to get that "perfect pic"!

We are sure we have all seen or been people who have done rediculous things around wild bears over the years. Chasing, approaching, or following a bear is an act that would be considered predatory to them. How would YOU feel if someone was following or watching you persistently. How would you react? Bears are certainly more forgiving than we are, but testing boundaries with any wild animal is not a good idea. Please don't invite Potential disasters with wildlife in Jasper.

Your speed and quietness put you at higher risk of a surprise bear Encounter. Slow down through shrubby areas, downhill areas, and blind corners. Travel in groups, make noise, and watch ahead. 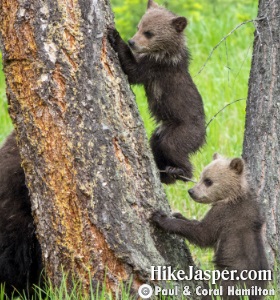